Everything You Need to Know About Root Canals 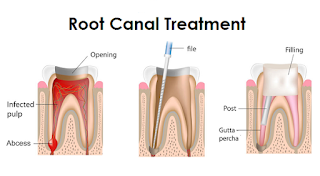 What is root canal?

The first basic question is what root canal really is. Root canal is a term that refers to a rotted or more commonly said ‘decayed’ tooth or one that has been infected by bacteria. Now root canal treatment however is a dental treatment procedure to treat the affected tooth/teeth.

Why are root canals important?

Root canals are significant due to the effects of it if not treated timely. Root canals destruct a single tooth possibly causing cracks or chips in that individual tooth as well as intense pain. This individually infected toothcan become the cause of neighboring teeth also being destroyed. However, the damage does not end there as an untreated root canal can lead to spread of the bacterial infection throughout your mouth, jaw throat and ultimately your entire body. Thus, it is important to treat your root canal as soon as you can from the most trusted and skilled professionals in the best dental clinic you can get your hands on.

Cavity in a tooth forms at the very core of it where the pulp or pulp chamber is present inside the root canal. The root canal is also the place where the nerve of the tooth is found. Basically what happens in a root canal is the removal of the nerve and pulp situated in the affected tooth so that it may not harm other teeth. Contrary to general belief, a tooth nerve performs no such significant function itself after its formation and only helps in detecting hot and cold substances. For the pulp, when a pulp is attacked by bacteria the bacteria begin reforming in the pulp chamber which leads to tooth infections and pus filled at the root of these teeth.

Signs that indicate it’s time for a root canal:

Common symptoms can easily help you identify if it’s time to visit the dentist in Pasco city if the infection has spread. A few symptoms include:

What happens in root canal treatment?

An X-Ray is the first step to getting a root canal treatment which helps indicate which tooth is specifically affected by the bacteria and if any surrounding areas have been affected or not. The next step is to inject anesthesia in that particular region mores so for calming the patient for their fear of pain, since cavity has made that region already nerve-dead meaning it can’t feel pain. Next up is the major cleaning process which involves drilling to the pulp and the area of infection. Dental tools are used at this point to make sure the area is cleaned of the cavity and bacteria and no remaining harmful substances are left behind in that region. Then, the area has to be sealed to avoid incoming saliva or food particles to come into contact with the operated area. This may mean a permanent sealing that very day or a temporary sealing till the next appointment if any more infection is to be scrubbed off in the next appointment. Both the interior of the tooth and the drilled hole are properly sealed and filled by professional dentists.

Root canals are known for being one of the most painful dental procedures. Hence, the aftermath of the treatment causes majority of the patients discomfort for the next few days and maybe even pain, depending on your tooth’s condition for which you can take painkillers such as aspirin and ibuprofen. However, it does in the end depend person to person as well according to their pain levels. Some may go back to their daily routine with utmost ease as soon as the procedure ends.

The most important aspect is to avoid further complications and take good care of your oral health since once it deteriorates it may cause a lot of pain and unease which you can prevent with day to day simple 2 minute actions such as brushing properly, flossing and avoiding cavity causing diet.

For more information on root canal treatments or if you need one for yourself or a family member or even just for a regular annual checkup in the tristate area, hit us up at Call Family First and we will tend to your needs to your utmost satisfaction.